This is one of the greatest stories of courage I ever learned – from my own family.  This story only recently came to light, and I'm so thrilled to share it with you. This story is about what helps us tap into our inner strength so we can access all we have within us so we can live and lead with courage.

This story takes you back to 1943 when a family took one of the biggest risks – to start a new life on the other side of the world.

My Nonno, Paul, owned a leather shop in Catania, Sicily. (I blame this for my innate addiction to shoes.) He tanned leather and suede to supply to shoe and coat manufacturers. The entire family lived above the shop in a palazzo, with a lavish marble staircase at the main entrance.

Life was good while prime minister Benito Mussolini was in power, giving holidays to the poor and assisting new mothers with money and goods. However, he didn’t support bad news in newspapers, and only those who had identification to prove they were a member of the Fascist Party were allowed to travel or work.

Many people remember Mussolini as a good leader – until he teamed up with Hitler.

Although the Italians and the Germans were allies in World War II, the Sicilians resented the Germans taking over their towns. Many aggressive soldiers abused the local people, ordering them out of shops while demanding the best of everything. My nonna felt uneasy. The young women were frightened. My Aunty Mary still recalls the eerie sound of the soldiers’ boots as they marched along the cobbled village roads.

At dawn on 10 July 1943, when the Americans invaded Sicily, everything changed. Operation Husky involved 150,000 troops. Air and sea landings using 3000 ships and 4000 aircraft were directed at the island's southern shores.

Before long, warning sirens alerted everyone to shelter in their basements. Up to five families would huddle in this dark, damp space; some nights, six alerts were signalled. Many nearby buildings were bombed.

A beautiful, tranquil southern Italian island was now at the centre of a war. Living on meagre food coupons was hard, with little access to coffee and sugar and other staples that we take for granted. My grandparents struggled to keep their business going with three children to keep safe. The food coupons ran out; luckily, the family was seen as wealthy, so they never went too long without anything. Nonno was able to access goods via the black market, but many others were not so fortunate. My generous grandparents often had people over and fed them; workers from their business stayed and refuelled over a meal with them.

The only distraction to pass the time was to listen to the radio or play records. When they could, the family went away on weekends to their property in Misterbianco, 30 minutes away – a brief escape from the nightmare that was unfolding at home.

As the war continued, Dad’s family relocated to the neighbouring village of Vizzini. At the peak of the bombing, they retreated to caves just out of town for three to four days at a time. It was more crowded than the palazzo basement, and even the sheep would join them in there. When they returned to Catania, they found bomb fragments that had come through the roof and landed on my grandparents’ bed. Even during this time, the Americans were more like friends than enemies, frequently giving the children chocolates and biscuits.

My father, Tony Giarrusso, was born in 1946. He grew up with two older brothers and a sister, Mary; 16 years older, she was like a second mother to him. She had attended primary school until grade 4, when her mother became ill, and she had to leave to look after her father and then two brothers. The family was well enough to have a maid; despite this, Aunty Mary was still expected to assist with household duties.

Tony wasn’t yet born when Aunty Mary and Nonna were visiting a shop, and a fortune teller asked to read Nonna’s palm. She predicted three things: something valuable would be lost, the family would go abroad, and Mary would marry a foreigner. Little did Mary knows that all three predictions would come true.

After the war, my Nonno's business started to suffer the effects of cheap imports. A proud man, he could not face working for somebody else. So the Giarrussos decided to leave everything and travel to America or Australia. Nonno’s sister had already moved to America with her husband to bring the family over. But Nonna’s brother Chico persuaded them to come to Australia instead and stay with him. Mary was 19, and Dad was three years old.

No one in the family could speak any language but Italian. Nonno said they would go for three to four years, long enough to get back on their feet, and then return to Italy.

They purchased tickets for the trip by selling their house, shop, property, and possessions.

In 1949 the family left Italy aboard the Greek cargo ship Cyrenia, used to transport people leaving Germany. Nonno, Nonna and their four children, aged from three to 19, sailed for Australia crammed into one small cabin with a bunk bed, their lives contained in a suitcase each and one large trunk.

Aunty Mary remembers many Polish and Jewish people on board, many with numbers tattooed on their wrists – a blunt reminder of the war. There were no other Italians on the ship, and all the music and food was Greek.

The trip that changed the family’s lives lasted 29 days.

When Dad and family arrived at the station pier in Australia, their uncle greeted them and took them to his farm in Koo Wee Rup, where they lived in a wooden house. Aunty Mary worried it would burn down – there were no wooden houses in Sicily.

There was no work in the country, so my aunty was sent to live with an Italian family in Melbourne and worked as a seamstress in a clothing factory.

The family resided in a small street in North Melbourne, in a two-bedroom place with no bathroom – they had to go to the City Baths to bathe. It was a far cry from their life in Italy. Nonna got the family settled, and Dad and his brothers went to the local Catholic school. Aunty Mary fell in love with a Cypriot man from her workplace; within a year of arriving, she was married, with a baby on the way.

The decision to stay was inevitable – their life and growing family were in Australia. My grandparents moved to Essendon to be near Aunty Mary and her family. Nonno continued to work at a
tannery and Nonna worked as a dressmaker until they retired.

It was 30 years before they had the opportunity to have a holiday and go back to Italy.

The 6 keys to courage 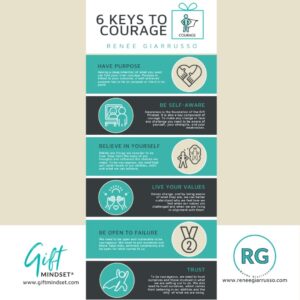 Courage is made up of some key ingredients. Like any recipe, all these ingredients need to be incorporated in the right amounts for the perfect dish. Let’s take a look at the six keys to courage.

– Be open to failure

Lead to be Limitless… 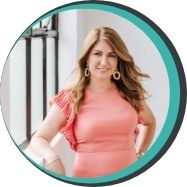 Find out where you sit on the Leadership Ladder. Your responses are anonymous, and the results summarised to help us better understand where our market sits so that we can continue to provide insights, tools and solutions to assist you in moving up to be LIMITLESS, co-creative and stand out.

Renée is a mentor, coach, expert facilitator and keynote speaker; She is the author of  ‘Gift Mindset®‘, ‘Limitless Leadership’, and co-author of ‘Leaders of Influence’.

PS: Want to skyrocket your success from working anywhere? We've launched our online program, and you can read more about that here.

Have you received your copy of Renée’s latest book, Gift Mindset®? It is available on Amazon, Booktopia and in all good book stores.

If this article resonates with you somehow, I’d love to hear your thoughts – get in touch.

Being in service to my clients is why I do what I do, and your feedback, insight, and suggestions are always embraced.